Twitter inspired, and me loving airplane landings, I wrote in inspiration of a habit I had of Tweeting ‘wheels down’ when my flight touched down. After finding nothing unique about it, I instead began appreciating the adrenaline rush when the engines’ reverse thrusters pulled me forward upon landing. First thinking it’s anxiety each time I’d press my feet against the cabin floor, tighten my core, and pin my back against the seat, it became a reflex rather than what I made it out to be. I could be making this shit up but trust me, I started creating those moments way before my first flight’s wheels up with my dad…

It’s usually at random when my mind seems to drift off. Much like how my father did while he sat in my peripheral during church service and drifted off to sleep. He’d sit up front in the left pews with the brotha’s during Sunday’s service. When we caught eyes, I’d look back down.

Sound awkward? Well, it wasn’t. It’s just who we are.

Although I wasn’t drifting asleep, I’d drift into a world where the high ceilings above my daydreaming head were overhead bins of a Boeing-777. Even as big as a customized 747, it brought church to be an in-flight experience just waiting for wheels down—I mean closing prayer.

Sidenote, Chris Paul is who I first saw Tweet ‘wheels down’. And I believe it was my 26th birthday weekend when my first ‘wheels down’ tweet was published after touching down in Oakland.

Mine’s didn’t get as many retweets…

Like any selfie off Instagram, Facebook, or SnapChat, I verbally flexed arriving at the destination I frequent to. A millennial thing or not, it could be generational. Who cares….

#PDXCarpet made it’s novel mark with simplicity. Yet for someone who’s seen that damn carpet time over time under the anxiety of looking down to avoid the, “you fly too…?” stare from travelers, the hashtag, like the tweet, is the timeless stamping of a happening.

After daydreaming through church of traveling domestically for my future NBA games, the church building became a spaceship and I was outta’ this world daydreaming from there. From landscapes of pastures, futuristic cities, cyber bars, and villages on small islands; what this has to do with wheels down or an airplane is just my in-flight, in-church imagination at play.

February 2018, my flight’s descending into Boston Logan International[BOS]. Seen in the photos below, we’re approaching from the northeast over Nahant Beach onto runway 22 L. A stream of fearful nerves make way through my legs noticing packs of snow and ice on the ground. Considering what I’m doing there, I need my legs.

We touch down and I immediately check the weather. Boston’s used to this, but coming from the west coast, the type of snow I was seeing, shuts down Portland.

Subsiding the anxiety, I deboard and head to Hertz rental. Fortunately, they upgrade me to a 4-wheel drive SUV to avoid the chance of getting stuck.

After entering Nahant Beach into my phone’s GPS, it’s no where close to BOS, but the photo in my phone needed some sauce behind its story.

So I drive there and run it! 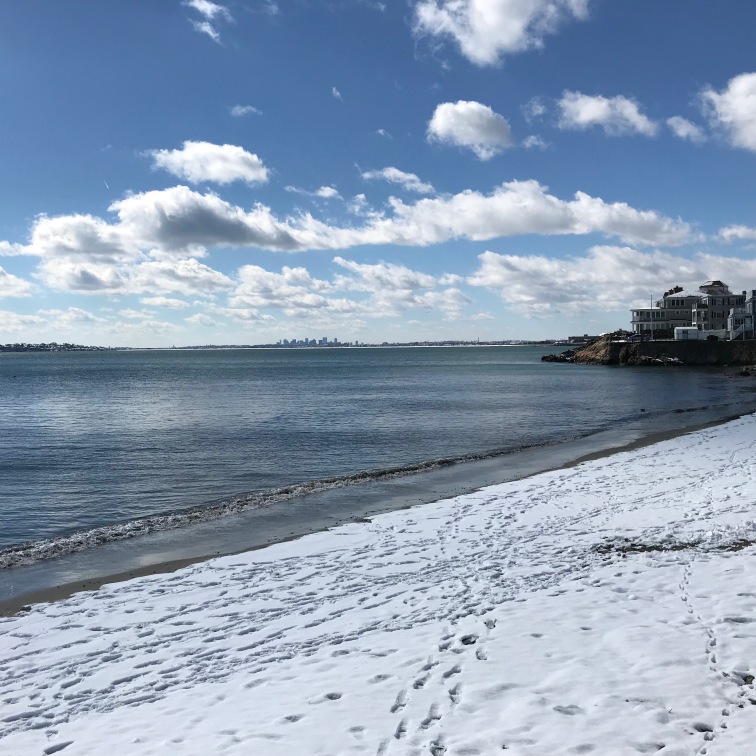 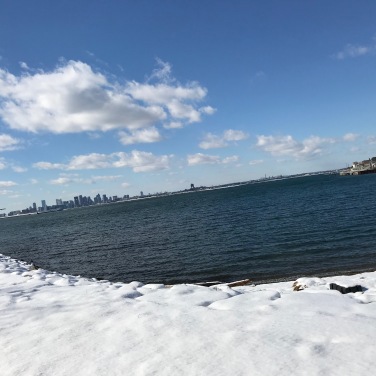 By noon, I’d ran my fourth cornering beach of the country. Nahant’s run completed a vision I had of running four different beaches, one per cornering state.

Two years prior, the idea originated by wanting to buy property in each corner of the country. Knowing it’d be a while before making that kind of money, I ran at the first possible corner to spark the fire on that journey’s trail.

The photo above was taken near Palisades Park after the 2016 L.A. WordCamp conference. I still work out in the free t-shirt from their goodie bag.

Fort Lauderdale could’ve been first but hurricane Hermine said, “nope, you won’t be making that meeting either big fella’…”

After delayed flights, rescheduling meetings, and less sleep, I at least got a picture.

Theoretically, I could’ve had two corners ran in less than a month. But instead, three things happen in the following months after my first run in L.A. First, the watcher of my dreams drifts away, eternally. My dad passed December 2016.

Two months later, however, I’m scheduled to fly back to Fort Lauderdale, and this time I run that beach for my second corner! The photo below is the only one I took…

It’s taken at a restaurant after my five-mile run somewhere along North Ocean Drive.

On the flight home whilst 35,000 feet, I’m thinking what proof do I have of running a Florida beach? Then it hit me—to have envisioned such odd goals in life, who’d care any ways? Ha, I’m running beaches on my work trips…

At least Fort Lauderdale was for work…

That’s ex-girlfriend in the background, she’s the second happening after running beach number one along the Santa Monica Pier.

Seattle was a cold-blooded run, not as cold as Nahant, but boy did that one sting—never wanna’ run it like that again. Lessons learned; stretch so that you’re the only one running you, breathe or have your breath taken, and never rely on the future of someone else’s path.

Moral of run three, layer up next to unknown waters…

Although I was nervous about the weather, before driving out to run the fourth and final corner along Nahant, I wiped tears when the reverse thrusters engaged. There was something about that landing, because what also followed touching down on runway 22 L at BOS was a smile. As I’m pulled forward, looking down with a rush to my head and the plane slowing down, I hide tears and tuck my grin.

I don’t think my father’s ever looked at me so hard. I also didn’t wanna’ look like a psycho who’s smiling with his head down on a moving aircraft.

While touching down upon a mindful closing prayer, awaiting the first-captain to set us free and be gracefully safe onto the worlds we seek, the blessed message out of the skies was that this is as close as I’ll get to my dad. The message might’ve been bumpy, but what flight, or lesson doesn’t have turbulence?

Sheesh, I sound spiritual as fu…

In closing, don’t take this as any mockery, this is me—gifted a smile which drifted me overseas to a fifth beach.

Above is along Hauula highway in Hawaii. Never planned it, just ran it til’ the wheels(shoes) wore down. It’s what happens when you pursue dreams the right way.

I remind myself each moment looking down in humility of who watches me, and through his eyes as I look up he says—nothing. Instead, he smiles. Which is what he did two weeks prior to his passing. That final smile, was the third happening after running the first wheels down in L.A.

Posted in Explorations of a Past Journey, In a Flight of Life, Poetically On The Run

Born and raised in Portland, Oregon, Budd writes because no one can 'read' him. And it's a great way to hide public thoughts...