I love seeing people keep their cars well maintained; it’s like living in the moment forever. If you’re a car enthusiast like me, you know there’s always something new to do for the ‘new car’ season to last longer. In any moment, you can be objective and renew the car’s reason. It’s a bit like life, deciding to be proactive and think better, feel better, and do better! But when you think you have no choice, you end up contributing to the process of a system called depreciation. Here’s what I mean…

You can create a moment of joy, but without the awareness of discipline and meaning, your journey out of it will lack a genuine ascendancy from the self…

How easy is it living a life where each moment is created by you? You determine change and transition with very little to worry about. Although free will might be at hand, realize the limits—democracy and discipline. While putting my memories in a cluster, as if they’re back to back episodes without breaks between the seasons, I come to think about my supporting cast. Which reminds me, Wayward Pines on Fox with Jason Patric was dope! Much credit to Rochelle Okoye, I appreciated her role as well. Anyways, with everything around us evolving from technology, jobs and cars, we can only imagine what’s next. Many new aged things will take jobs away, voiding the need for cars and our daily essentials. On the other hand, we’ll need support roles for our evolving technologies.

With consequence, I believe we have free choice, but do we see the changes happening around us? Maybe it’s why most don’t choose. And, do we understand in each moment we choose to act, or not act, we’re influencing others who are our supporting cast? As each moment in this theater of life unfolds out of the choices we’ve made, very few, however, know how their choices affect everyone else.

This is how I think, and why I have a natural appreciation for people who live outside the box. I’ve been told people like myself are hard to read. We’re outsiders often looking in. The same people who’ve told me I can make this world whatever I want, aren’t doing the same for themselves. All the reason why I think a car is as dope as the owner who maintains it—relative because they don’t have to tell me much about the world they’ve created for themselves.

It’s reflected in their vehicle’s shine 🙂

You know I’m going to talk about cars being trashed, like my classic favorite Pontiac Grand Prix, Oldsmobile Cutlass, Cadillac Deville’s, and Chevy’s, because that won’t change anytime soon. As people use and abuse cars, depreciation comes sooner… So, I get it. Most don’t care.

Okay, I get that too; cars aren’t as important as family, health, and career stuff.

Anyways, this is my creative perspective and experience.

So, I’ll first talk about owners who never let their vehicle go. Starting from the day it’s driven off the lot, into each week where something is done to sustain its meaning, maintain its pristine, and in faith retain the value. Years down the road, not a big brake job, water-pump replacement, transmission or gasket issue stops them from giving up on it.

Although at some point, it becomes a scraper….

Where classic cars are creatively restored before forever being parted out.

On a sidenote, to the folks who bought a car for the purpose of getting from point A to B, you grocery getters, you’re probably not reading this, but take notes…

During the initial stage of car ownership, whether it’s new [used] to you or fresh off the lot, it’s stylin’ season with each urge to drive and show it off. If you’re young and irresponsible like I was, you’ll volunteer to be D.D.D. It’s the honeymoon stage where you’re getting to know the cockpit of your vehicle, and yet to be in a secondhand relationship with it.

Most drivers are over this stage within the first year. Also, if you’re like me and get wander eyes, you experience the occasional admiration for other cars and what better to drive next.

Especially when the first leak occurs, timing belt faults, or any high maintenance repair cost arises, suddenly it’s time for a new what..?

For us enthusiasts, who work on getting it fixed immediately, we do anything to maintain a good condition so our wander eyes don’t take away joy from what’s being driven now.

This is the point where most drivers start letting go; then the door handle goes, but you feel no need to fix it because you know you need to prioritize repairing the brakes.

From there it’s a slippery slope. At some point those frequent car washes won’t be fooling anyone…

Through September and October 2004, I looked on Craigslist & AutoTrader to find the ideal car, which was going to be a Honda Accord. Eventually, I came across a 1986 Accord (my year) stick shift. I had no idea how to drive a stick shift but still contacted the seller. A day later I rode MAX to meet with him in Goose Hollow. Without test driving it, Googling ‘how to drive a manual transmission‘, and not knowing much about cars, it’s purchased!

After embarrassing myself trying to unpark it off a hill, because of course the seller parked it on an uphill, I asked my brother-in-law to come drive it home for me. Later that evening, my dad taught me how to drive it, claiming it was all about timing with the clutch. What a way to time the lesson.

I cleaned it every other day and it barely had brakes. One day, we put Eddie Barnett Jr. in the trunk so the seven of us could all go eat lunch at Taco-Bell. A few months later, the head gasket blew driving back home from my ex-girlfriend’s house on highway 26.

I was devastated—and didn’t have the money for repairs. 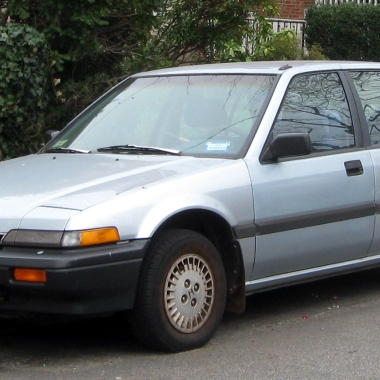 Interior
-Budd of the past…

Before the overheating and mechanical issues, I drove it like I stole it. There were several things I did to revive the look, because any honeymoon stage with an 18 year old Accord won’t last long without putting countless amounts of money into it. I did everything to keep me happily driving it.

In retrospect, there were two seasons; let’s get out to show you off. And a couple months later, what can I do to stay in love with you?

After leaving the car roadside, it hit me as a hard turning point in life. In deep, and thinking inside the box, I couldn’t fathom getting back on the MAX to school, riding a bus to work, because I also had to tell girls, “…I ain’t got a car anymore.”

Like a water droplet dripping into a pool of water, one decision trickles out creating a wave of reactions. As for the day I went and bought the car ill-advised, I attracted people who needed rides. It was months later when I came to a better perspective, pulling myself out of the regret to accept the goodness of that moment where I made a choice to purchase it. I figured I was thinking outside the box as I always have. The other option at the time was to get back on the MAX, and ride public transportation until next time.

My choice, however, was to jump further out that box and drive my own. Creating a ripple of trickling people who wanted to ride shotgun. I could’ve cared less for the attention, because it was more about how one rash purchase attracted me as TheDriver.

I’ve always wanted to be in an objective position to make changes, turn directions, and head elsewhere in life when I felt so.

Like technology—where the turning points are rolling out new stuff. For example, Apple releasing the new iPhone 7, we immediately have new usability for a way of calling, texting, taking photos, and sharing on social media. If you’re on older software, you’re behind in the bigger picture of technological things, but that’s fine.

Just creatively own it. Who do you think comes up with the technology?

For us humans, we often experience subjective change by reconstructing our past in the moment. The trick is applying it to benefit you, and ensure it makes you happy in each moment from there on. Just be honest and don’t harm anyone.

All over the world people are experiencing the seasons of life without enjoying the transitions. Life goes faster the older we get—it’s called time relevance and most changes happen right before our eyes. Aside from the tragic and unplanned transitions, it’s challenging to see where the turning points are.

“We are more alike, than we are unalike…”

Best to Carpe Diem and make your own, like now!

Theoretically, you could control each moment like technology upgrades its features and products, so why not now? The other option is allowing patterns of your past to do so for you.

No one’s operating on iOS8 with an iPhone 11.

In a broader perspective, you could be experiencing a turning point today, but unaware of it. We’re often too busy to acknowledge them anyways. Like the people of Wayward Pines, who unfortunately had no choice and realized they were just apart of the waters flowing down stream for others.

(Spoiler alert) Because it’s decades later when they find out how one man’s decision of the past, affects them today.

So again, why not make it your choice, your meaning, and drive it insanely through every moment? You can start now by appreciating how easy it is choosing to smile 🙂

One thought on “CARPE DIEM”